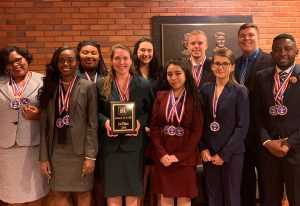 “Coming in to my second year as the director of the team makes this win even more special. It displays our continued growth and commitment to excellence,” Wideman said.

Shayla Cabalan ’20 (Communication and English) earned first place in the event of Radio Broadcasting. Of her experience with the team she noted, “Speech and Debate, in my opinion, is one of the most honorable ways a student can represent the university. As a whole, speech and debate involves speaking on important topics, starting crucial conversations, and creating a dialogue for change.”

Sierra Roberts ’21 (History and Social Studies Education) earned first place in the event of After Dinner Speaking. “Being a part of the team has taught me several valuable lessons, most notably it plays a vital role in preparing me for my future. As a future educator I will use many of the skills I have learned through teaching in my own classroom,” she explained.

In addition to Cabalan and Roberts’ success, the entire team turned in strong ranks. See the full results below: