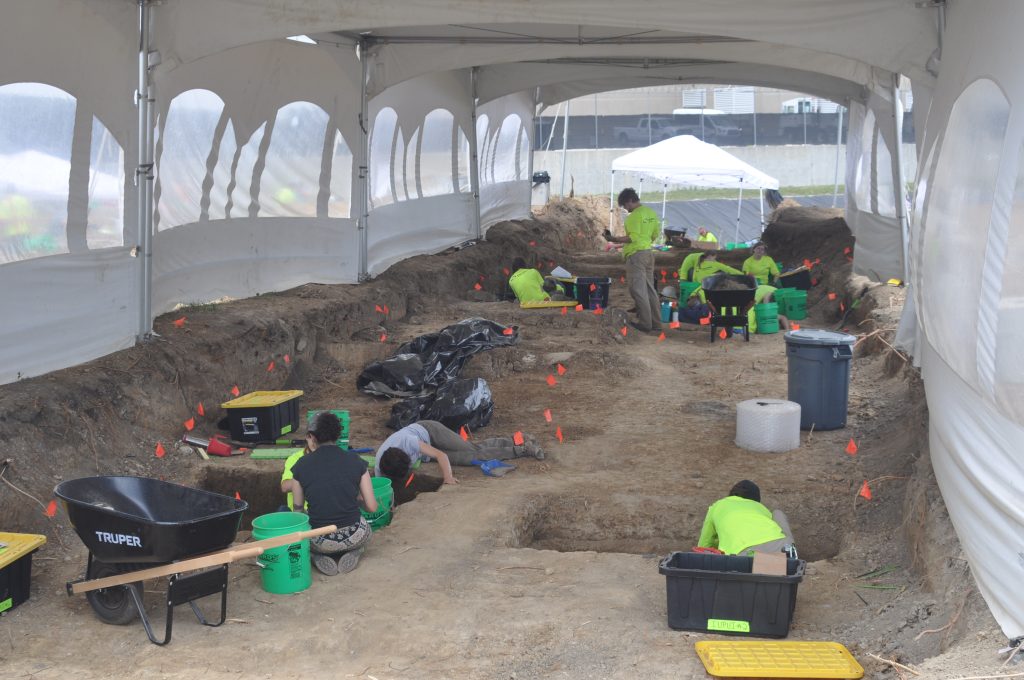 A University of Indianapolis faculty-alumni collaboration played a major role in the relocation of a 19th-century cemetery near the Indianapolis International Airport. When land was acquired by the airport for a stormwater project in 2018, it necessitated the relocation of Bethel Cemetery, which dated back to 1838. This project entailed the exhumation and relocation of the remains of approximately 500 people to Concordia Cemetery in Indianapolis.

The project was a joint effort led by UIndy alumnus Ryan Peterson ‘96 (anthropology, biology), Christopher Schmidt, University of Indianapolis professor of anthropology, and faculty from IUPUI. Schmidt was contacted by the Indianapolis Airport Authority after they learned of his work on the “Grave in the Road” project in 2016. The community outreach component of that project was a factor in the Airport Authority’s decision to bring the University of Indianapolis on board for the cemetery relocation.

At the beginning of the project in May 2018, UIndy students participated in an archaeology field school that Schmidt directed. “The field school students, as well as some of the current and former graduate students, made up a significant number of field and lab crew for this project,” Schmidt said.

MacKenzie Vermillion ‘20 (anthropology and molecular biology major, archaeology minor) was one of the students who participated in Schmidt’s field school. “It played a huge role in the success of the project because it taught us the necessary skills when dealing with the exhumation of bones,” Vermillion said. “The course included learning how to identify burial features, identify human bones, and how to properly uncover the remains without causing damage. Overall the field school was extremely helpful and equipped me with the necessary tools I will use throughout my career.” 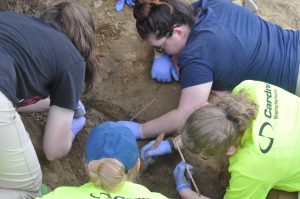 The process of exhumation and relocation was a complicated one that involved coordination from all parties. First, the surface of the cemetery was stripped using heavy equipment while trained spotters were on the lookout for grave shafts. Once a shaft was exposed, archaeologists removed the sediment from the shafts and exposed the remains. The remains were 3D-imaged on-site, then moved to a lab on the airport grounds for cleaning. It was then that the remains were taken to the universities for osteological study.

The team completed skeletal analysis in spring 2019 and all remains were returned to the airport laboratory by June 2019, with the reburial taking place in September. Each set of individual remains was put in a new concrete vault and placed in the same relative position it had in the original cemetery. In addition, those individuals whose headstones had been lost over time had a new headstone made acknowledging their presence, although unfortunately most of those people’s identities remain unknown.

The process was not without some surprises for the archaeologists and researchers along the way. Schmidt noted how the suit one individual was buried in was still discernible even many decades after death. “I was also surprised at how decorated many of the caskets were,” Schmidt said. “We picture historic cemeteries as being very humble, but many of the people at Bethel had large headstones and/or elaborate and beautifully decorated caskets. These people were likely from a farming community, but several families spent generously on the graves of their deceased loved ones.”

There was a rededication ceremony at Concordia Cemetery for the graves that had been moved. “It was a lovely service that celebrated the many lives represented by the cemetery,” Schmidt said. “For the veterans, ‘Taps’ was played and salutes were fired by military, law enforcement and re-enactment color guards.” In addition to affording those veterans this honor, the archaeological team took great care to show them respect while they were in the field. All of those individuals had their remains covered with an American flag in the field, and they were given a police escort whenever they were transported. 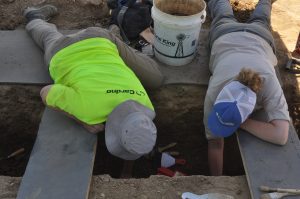 “The size of the project was amazing; it is by far the largest excavation effort I have ever been a part of,” Schmidt said. “Moreover, doing all this in one year was a challenge, but everyone did their jobs and it worked perfectly.”

For the students involved, it was challenging but also a fulfilling and rewarding experience. “Each person, when excavating, is responsible for the burial they are working on. There were, of course, professors and other more experienced archaeologists if we ever needed help, but the students still played a major role in the excavations,” Vermillion said. “It was a learning experience, and anytime we experienced challenges we came together as a team and handled it. Everyone present was always willing to help one another out!”

According to Schmidt, this was a completely unique experience for the UIndy students who were involved because there had never been such a large cemetery moved archaeologically in the State of Indiana.

“The students involved in this project truly did something special. We don’t have experiences like this available every year.” Schmidt said. “But when we do, they not only give us an opportunity to learn or study, but also to help students develop a sense of reverence for the deceased. We treat all remains we excavate and/or study with the utmost respect, and it is important that the students improve their professional skills, but also develop proper ethics as well.”

Vermillion and other students, throughout the collaborative process, were appreciative of the opportunity to be trained in a bio-archaeological context as well as learning from other professionals. Moreover, the project allowed the students to experience practical application of what they have learned in the classroom, as well as how the work that they do can provide meaning in a real-world context.

“Handling human remains was a humbling experience,” Vermillion said. “One of our biggest rules is to treat these individuals with the utmost care and to help preserve them. Working in this context continues to remind me and my peers of our humanity and how we should be treated: with respect.” 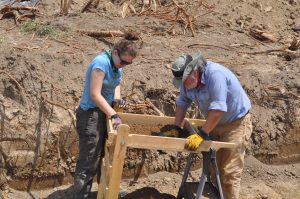