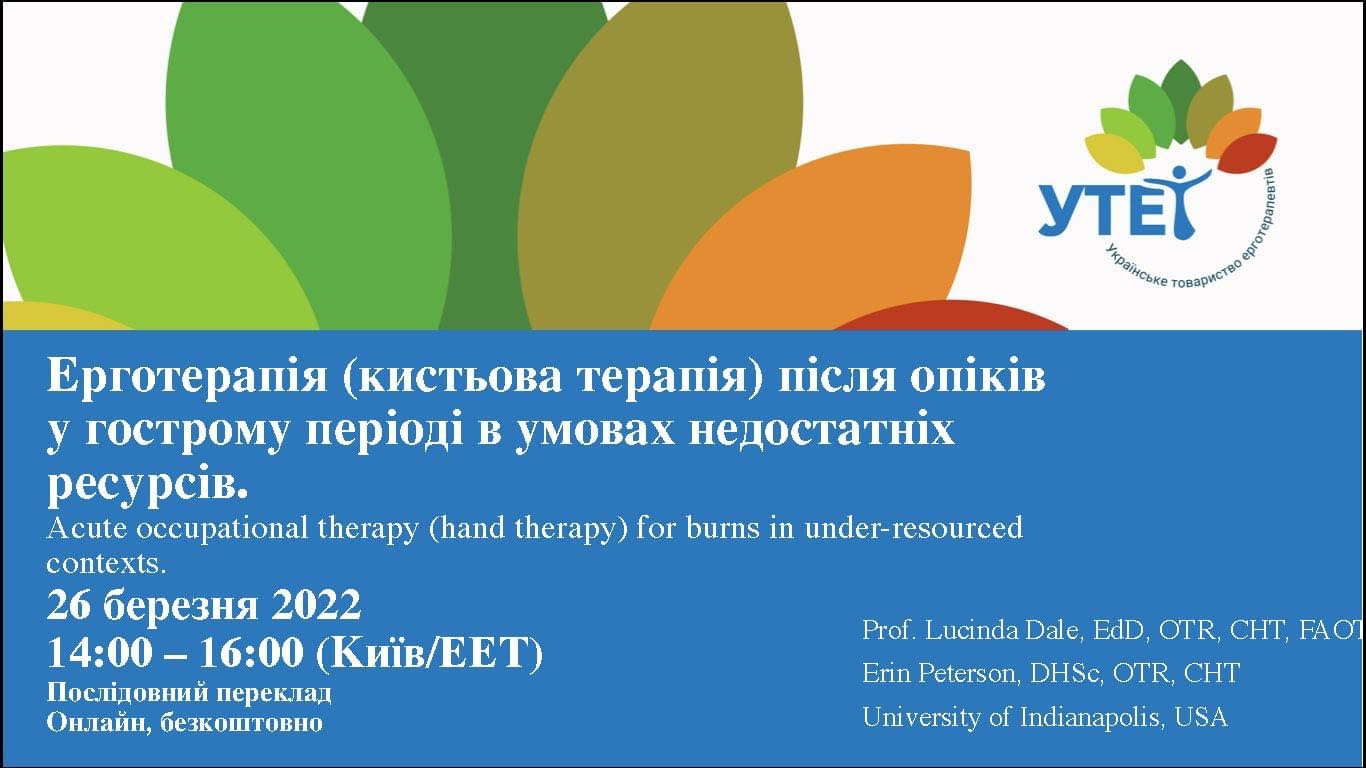 In mid-March, Drs. Lucinda Dale and Erin Peterson, professors within the University of Indianapolis School of Occupational Therapy received an urgent email from Olya Mangusheva ‘11 (Occupational Therapy), a UIndy alumna living in Ukraine at the time of the Russian invasion. Olya was experiencing the destruction and devastation of the invasion first-hand and saw a need for additional education on treating those with burns and amputations, so she turned to her UIndy community for help.

Within the week, Drs. Dale and Peterson worked with Olya to prepare a webinar titled, “Acute Hand Therapy for Burns in Under-Resourced Contexts.” The webinar would discuss the basics of burn treatment, including how to prevent deformity, manage swelling and scar development, and how to repurpose everyday items to be used as splints, also known as “orthoses.”

“We have the luxury here in the States of using very high-quality, high-cost equipment and supplies to make orthoses or splints as a part of care for individuals who have burns and other conditions where deformities develop and loss of function occurs rapidly,” said Dr. Dale. “That word ‘under-resourced’ is really critical to what we put together because we [Dr. Dale, Dr. Peterson, and a graduate assistant, Cassidy Rozek] scoured the recycle bins, the hallways in the Health Pavilion and asked ourselves, ‘what would they have overseas that could be improvised for the materials we have the luxury of having?’”

Due to the amount of shelling and bombings against Ukraine, burns are one of the most common injuries occurring. Unfortunately, burn injuries need rapid treatment to avoid loss of function, especially when affecting a joint. Splints are used to hold injured areas in a position that will prevent deformity and preserve function. For example, burn injuries affecting the hands may require a splint to hold the wrist and fingers in place so that they do not curl and heal in a way that locks the hand into one position.

“A slipper or the sole of some random shoe could be used to support the wrist and keep it in a more functional position,” explained Dr. Dale. “But that would have to be done after the wound is closed because those are not sterile objects.”

About 130 health care providers from Ukraine attended March’s webinar. Olya, who is fluent in both English and Ukrainian, served as a moderator and was joined by three translators for Drs. Dale and Peterson.

As the webinar progressed, the severity of the situation in Ukraine became evident. Olya prepared Drs. Dale and Peterson for some unusual situations that may occur during the presentation.

“We were making sure that everyone who joined the session was muted because Olya said we might hear sirens in the background,” recalled Dr. Peterson. “We didn’t know where people were. This is an active war. It’s hard for us to think about that because we think of it as overseas, but it’s happening on their streets.”

Attending a webinar in the middle of a war and the ensuing challenges are unimaginable to most. Simply staying connected to a Zoom webinar is a challenge.

“There was a constant come in, go out, come in, go out, and that could have been because of webinar participants’ safety,” said Dr. Dale. “You know, I don’t have to worry about that when I go to a conference. We just can’t conceive what that must be like.”

Following the success of this initial webinar, Drs. Dale and Peterson are looking for ways to continue supporting those in need in Ukraine. This may result in additional webinars covering other areas of need, such as more extensive lessons on amputee care.

“Erin and I feel like we provided a good foundation to launch more specific education sessions,” said Dr. Dale. “Olya considered discussing a couple of case studies as a follow up. Another alum, working with additional colleagues, may share actual cases that they have dealt with in their expertise for burn care and it could be that Erin and I are indirectly involved in terms of facilitating events. We’re very fortunate to have colleagues who are extremely interested and want to make contributions.”

Those colleagues include alumni and former faculty members working in health care, as well as current faculty within the School of Occupational Therapy and the R.B. Annis School of Engineering.

“I reached out to the School of Engineering (SOE) when this came on our plate because Olya said they didn’t have access to thermoplastic, the material we use to fabricate splints,” explained Dr. Peterson. “One of faculty members in SOE specializes in composite materials so I asked him what kind of materials could potentially be used instead. We are still brainstorming different materials that could function like thermoplastic, but that might be something that also comes out of this.”

Together, the UIndy community is finding solutions to war-time problems and fulfilling the mission of education for service. Stay tuned to UIndy360 for more information about how you can get involved in Drs. Dale and Peterson’s efforts in support of the people of Ukraine.