Campaign for the University of Indianapolis enters second phase 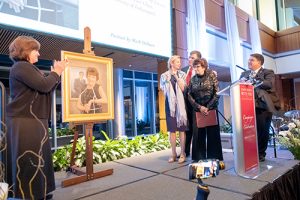 A new portrait of Yvonne Shaheen, campaign chair and former board chair, was unveiled at the campaign celebration in September. The portrait is now on display in Good Hall.

The Campaign for the University of Indianapolis celebrated the phenomenal success of its first phase and launched an exciting second phase with a celebration at the Deer Zink Pavilion at Newfields — the site of the public launch of the campaign in late 2015. The five-year comprehensive campaign exceeded its original goal of $40 million and a revised goal of $50 million within the first three years. The second phase of the campaign has been extended to and will conclude in 2022, which marks the 120th anniversary of the University of Indianapolis.

The first phase of the campaign raised an unprecedented $59 million from 32,500 gifts, President Robert L. Manuel announced, making it the largest fundraising initiative in University history. Principal early gifts set a strong momentum for the campaign, starting with Campaign Chair and former Board Chair Yvonne Shaheen’s $5 million naming gift for the Shaheen College of Arts and Sciences, which represents the largest single one-time gift in University history. The earliest transformational gift to name the Shaheen College of Arts & Sciences will impact every undergraduate at the University of Indianapolis.

Other significant gifts provided the University with a variety of new programs and spaces, including the Ron & Laura Strain Honors College, the Gene & Mary Ann Zink Poverty Institute and the Ray Skillman Auto Group Court.

The R.B. Annis School of Engineering represents another major campaign accomplishment. Established through a transformational, $5-million gift from the R.B. Annis Educational Foundation, the program is advancing the University’s strategy to address Indiana’s demand for skilled engineers and STEM-related professions.

“The University of Indianapolis has a tradition of seeing opportunity, creating partnerships and finding a way to connect with our community to create real impact. Together we have accomplished so much,” President Manuel said.

The campaign focused on four areas: students, faculty, the community and the University’s future. Through $26 million in student support, including 40 endowed scholarships, the campaign has made it possible for students to achieve a private university education, travel abroad for study, participate in undergraduate research and access cutting-edge technology crucial to their careers. More than 90 percent of University of Indianapolis students receive some form of financial aid. With 74 new faculty teaching new programs, students can continue to engage one-on-one with professors to create the foundation for lifelong learning.

The Shaheen College of Arts & Sciences gift set the stage for several transformative projects, including the renovation of Good Hall, which was made possible by gifts from more than 500 supporters. The project included restoration of the iconic portico and pillars of Good Hall, the University’s most historic building, and renovation of the interior.

The generosity of more than 150 alumni and special friends supported the creation of a new Martin Family Finance Lab for the School of Business, which represents another key achievement of the campaign. The Finance Lab is named in honor of former Board of Trustees chair Tom Martin ’72 and his family, who are major supporters of the project.

The Finance Lab brings students access to state-of-the-art technology which provides them with a competitive edge as they enter the workforce. Students will be trained using Bloomberg Market Concepts software on Bloomberg terminals, the premier tool of its kind in the financial industry. Finance Lab tools will be used to research data for the UIndy Student Investment Fund, a hands-on learning experience that allows students to manage $100,000 in a student investment fund.

Key naming gifts in addition to the above include the Sutphin Center for Clinical Care, Shreve Atrium, the Community Health Network Engagement Fund, the Gerald & Marjorie Morgan Endowed Chair in European History and the R.B. Annis Auditorium.

The second phase of the Campaign for the University of Indianapolis will seek to raise a cumulative total of $75 million by 2022 — the year that the University will celebrate its 120th anniversary.

“While lead transformational gifts have been incredibly important to our campaign’s success, the cumulative effect of thousands of gifts from alumni and friends have also pushed us to new heights,” said Christopher Molloy, vice president of university advancement. “As we enter the campaign’s second phase, we look forward to building on the momentum of our accomplishments in phase one.”

The second phase of the Campaign will continue to focus on creating opportunities within the four core areas, with initiatives originating with faculty, staff and students.

The University honored Yvonne Shaheen for her outstanding campaign leadership, which has reverberated throughout the City of Indianapolis. A university trustee for the past 20 years and immediate past chair, serving as the chair of the campaign since its founding, and providing the single largest pledged gift from an individual in the University’s history, Mrs. Shaheen has helped the University engage with the most pressing issues in higher education.

At the campaign celebration, Mayor Joe Hogsett led a toast to Mrs. Shaheen, and the University unveiled a portrait of Yvonne Shaheen and her late husband, Riad, which will be displayed in Good Hall.

“We have accomplished great things together, but this is just the beginning. We have a responsibility to continue forward in the university’s vision. I believe in what UIndy can do for students now and in the future. Sharing that belief with others is our next step in giving back,” Mrs. Shaheen said.

Learn more about the Campaign for the University of Indianapolis