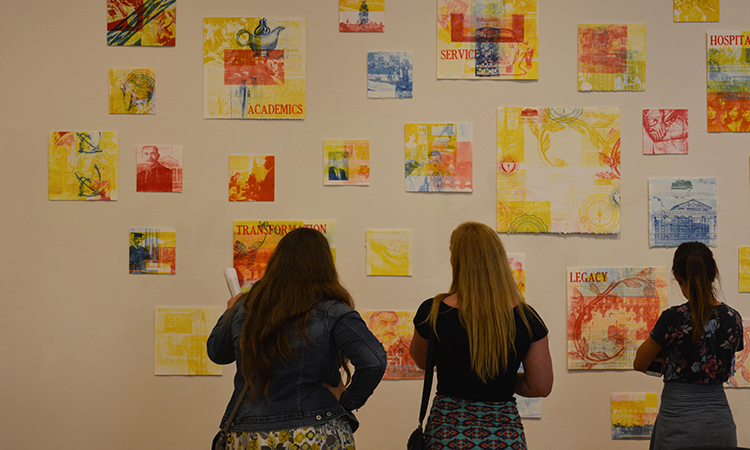 A new print mural at the University of Indianapolis will pay homage to University history while acknowledging the power of intergenerational collaboration.

The “Infinite Campus” exhibit, with contributions from University art & design faculty and students, will be installed this semester in the Krannert Memorial Library. Through themes including service, transformation and campus life, the mural illustrates the concept of reincorporation, an idea explored in an upcoming book by Michael Cartwright, vice president for University mission and associate professor of philosophy and religion.

“Reincorporation is a pattern of memory in which actions and ideas come back into focus that previously had not been fully recognized as significant, or the discovery of new significance when existing actions and ideas are placed alongside new ones,” Cartwright said.

In keeping with this theme, Cartwright recently held a celebration called Wisdom’s Feast to celebrate the mural. The Strain Honors College hosted the August event in collaboration with the Office of University Mission and the Department of Art & Design.

Organized by Katherine Fries, assistant professor of art & design, and Jim Viewegh, professor and department chair, “Infinite Campus” represents a collaboration by faculty and students using the Universitys printmaking resources to create a series of printed artwork. The project was funded by a NetVUE grant the University received from the Council of Independent Colleges.

Fries was inspired to create  “Infinite Campus” after reading a manuscript of Cartwright’s book, Wisdom’s Children, which explores the idea of reincorporation within the University of Indianapolis history and mission. The book will be published in 2018.

Infinite Campus is made up of 42 prints that all relate to each other, to be displayed on a wall on the second floor of the Krannert Memorial Library. Each print incorporates letterpress, photographs, original drawings and dates, as well as contemporary and past student and University images. Mark Vopelak, who manages the University’s archives, assisted the group with curating historic photos.

At the center of “Infinite Campus” are unfinished panels, which Fries explained were deliberately left blank for future artists to contribute. Fries hopes to include more students in future installments to explore other aspects of the University’s legacy. The six themes of service, hospitality, transformation, campus life, academics and legacy will be expanded.

Fries said it has always been a goal of hers as an artist to work on a project like “Infinite Campus.”

“To create a piece of art through printmaking allowed us to showcase the history of the University and the student experience and how it has transformed, but there are still common threads to the past,” Fries said.

The connection between the printing press and education ties in closely with that narrative. While traditional printing presses are no longer essential in the digital age, Cartwright explained that initiatives in the University’s art & design program, such as the Hullabaloo exhibit in early 2017 and the addition of letterpresses to the Printmaking Studio, are finding new life for old technology.

“There’s an interesting way in which you take something that has a utilitarian purpose and you shift that and it becomes subject to an artistic purpose,” Cartwright said.

Other examples of reincorporation can be found in Lin-Manuel Miranda’s hit musical “Hamilton.” Closer to home, the changing of the University of Indianapolis name. Cartwright said “Hamilton,” with its unique blend of history, hip-hop and other musical forms, provides one of the most powerful contemporary examples of the way the disciplines of history, theatre, and music can achieve a remarkable reincorporation.

Cartwright shared the story of the evolution of the University name – from Indiana Central University to Indiana Central College (and back) to the current name assumed in 1986. During President Gene Sease’s leadership, the university also changed its address from 4001 Otterbein Street to 1400 East Hanna Avenue, which better fit the university’s metropolitan Indianapolis location. The university’s original signage from the 1930s became obscured by trees, which prompted the push – from a group of students – for a more comprehensive campus presence.

“If we can recognize the agency of students in one of the most significant shifts in the university’s saga, then we are able to begin seeing student initiative at other points in our university’s history,” Cartwright said.