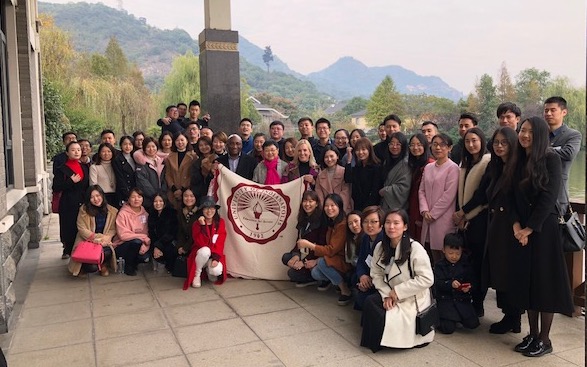 The University of Indianapolis has connections in China, Brazil, Turkey and beyond that allow for the exchange of faculty members and students and other collaborative activities.

Through accredited partnerships with Chinese institutions, more than 1,200 Chinese students have achieved a University degree and about 200 students are pursuing degrees now, spending at least one year in Indianapolis. The program offers students from both countries the opportunity to pair their education with a cultural experience that will last a lifetime.

In November 2017, the University strengthened its connections in China by establishing the Chinese Student Alumni Association and hosting several student engagement events in China.

“Our two joint programs in China (NIT & ZYU) have enhanced the University’s internationalization since 2004,” Lin said. “These two programs have also enhanced diversity on campus.”

“It’s important to remind someone half a world away that they’re still part of our UIndy community,” Ferise said. “These trips make sure there are touchpoints for students and graduates and allow us to continue building relationships.”

The group hosted the first-ever Alumni Day in Hangzhou, along with two UIndy Days for current students in Ningbo and Shaoxing. At each event, students shared their experiences, participated in social activities like tea ceremonies and music recitals and learned about news from the University. It was a chance to celebrate and network with current and former students and to make personal connections that wouldn’t be possible otherwise.

“It was very moving to hear the alumni stories,” Ferise said. “Every single one of them harkened back to their time and credited the University for where they are now. As professors, we want to think the things we put out in the universe matter, and this was proof they do.”

The exchange programs in China have been a pivotal part of the University’s international engagement portfolio for more than a decade, with plans in place for continued growth in the years ahead. Seven University of Indianapolis professors are now teaching at Chinese institutions.

As the faculty advisor for the program, Lin has been working hard to increase the University’s visibility in China, sending marketing materials for display and making five to six trips to China each year.

“The most vibrant universities are those that have living, breathing communities of people who remain connected to them,” Ferise said. “Opportunities for networking, student internships, future student employment and enhanced campus diversity – that’s what we want.”

The next trip to China is slated for March 2018.