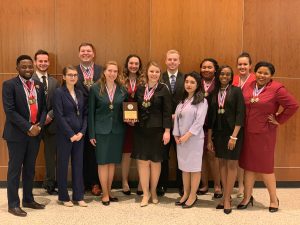 The UIndy Speech and Debate Team is a nationally ranked learning-centered community that competes in speaking events to enhance student’s communication, research, and public speaking skills. Stephanie Wideman, assistant professor of communication, is the team director.

“Our success at the state tournament is reflective of a distinguished work ethic among the students and coaching staff. We are pleased that our efforts and skill were recognized at the state championship. I am particularly proud of this team’s ability to act as ambassadors for our university throughout the state,” Wideman said.

Craig Chigadza ’21 (political science and psychology) earned the title of State Champion in Persuasive Speaking. “Winning the state championship is a testimony to hard work, but ultimately I could not have done it without the support of my teammates and coaches who always challenge me to go the extra mile,” he said.

Chigadza’s win qualifies him to compete on a national level in the country’s oldest speech competition, the Interstate Oratory Association’s (IOA) Persuasive Speaking Contest held in April 2019 at West Chester University in Pennsylvania. IOA’s birth as an intercollegiate event was in 1874, and the organization is composed of approximately twenty state collegiate forensic organizations. The organization’s purpose is to conduct an annual competition in oratory. Participants in the contest are the top two finalists in each of the respective state contests. Participants in this contest will have their speech published in the organization’s annual publication, “Winning Orations.”

ICYMI: UIndy Department of Theatre is presenting a production of The Taming of the Shrew this weekend! For Dates, Times, and More Information, Visit bit.ly/2WuFTkK

Did you receive a scholarship to attend UIndy? Are you using your experience from UIndy to make a difference? Help us tell your story and celebrate #GivingTuesday! Learn more: bit.ly/3mcYbRN pic.twitter.com/duq3WUu1Lw