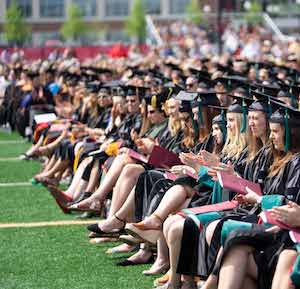 Watch a live stream of the Commencement Ceremonies on uindy.edu/graduation.

President Manuel will preside over each ceremony, which includes a full academic procession and musical performances by University faculty and students. The total number of University of Indianapolis graduates for 2019 (including May and August) stands at 1,352 students from 22 countries and 27 states, with 843 undergraduates, 468 master’s and doctoral students, including 41 graduates at the University’s international partner sites.

The University of Indianapolis will confer honorary degrees on Lonnie Johnson and Bob Zellner, two visionaries who embody the mission of the University. Lonnie Johnson is a world-renowned inventor, as well as president and founder of Johnson Research and Development Co., Inc. He has earned numerous awards from NASA for his spacecraft control systems and is the inventor of Hasbro’s Super Soaker® Water Blaster. Bob Zellner is a prominent civil rights activist and Freedom Rider who has dedicated his life’s work to the pursuit of equal rights for African Americans. Zellner will be honored during Friday’s Graduate Commencement and Johnson will receive his honorary degree during the Undergraduate Commencement Ceremony on Saturday. Learn more.

Trevor Manspeaker ’19 (doctorate of occupational therapy) will serve as the graduate student speaker May 3, and Jacob Whatley ’19 (nursing) will speak on behalf of the undergraduate student body May 4.

UIndy 2019 Commencement by the numbers: