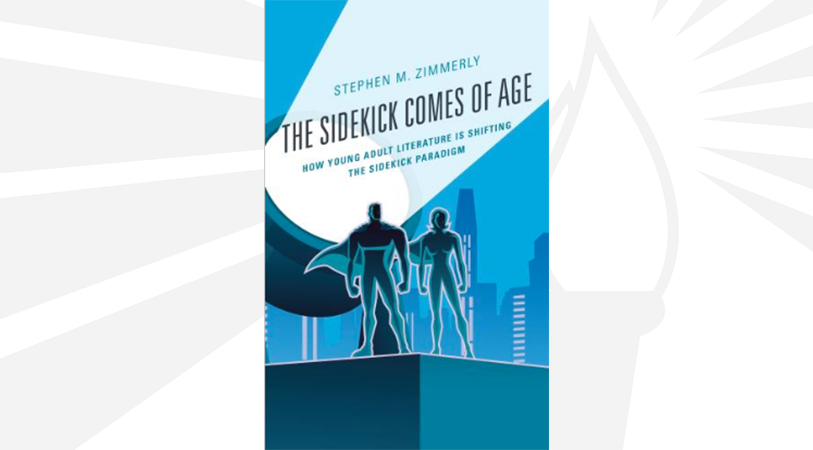 Would Sherlock Holmes have been the world’s greatest detective without Dr. Watson? Could Batman keep Gotham City safe without Robin? Could Frodo have made it to Mt. Doom without Sam? Could the Avengers have stopped Thanos without the help of countless sidekicks along the way like Falcon, Bucky, Iron Patriot and Wong?

Despite the fact that sidekicks have played an integral role for many of pop culture’s most famous heroes, they have remained underdeveloped in literary and critical study. University of Indianapolis assistant professor of English Stephen Zimmerly has examined how the role of the sidekick is ever-expanding in modern media in his new book “The Sidekick Comes of Age: How Young Adult Literature is Shifting the Sidekick Paradigm.”

For Zimmerly, this is a passion that started early in life. “I remember that even as a kid, I would always pretend to be Robin, not Batman,” he said. “From a professional standpoint, I became interested in sidekick characters when I realized that sidekicks very seldom received any focused attention as the main subjects of literary study.

“When it suited their purposes, scholars would mention or use sidekicks, but always as a means to illustrate some larger issue, and the sidekick would exist as a colorful footnote.”

Zimmerly has noted that young adult literature has embraced the sidekick – recognizing the way the character can reflect the importance of growth and finding one’s place in the world. In this type of literature, authors are finding ways to add complexity to sidekick characterization. Tactics used to accomplish this include letting sidekicks “evolve” over the course of multiple books or perhaps even using parallel novels telling the story from the sidekick’s perspective.

A specific story-type gaining traction in young adult literature right now is the superhero sidekick who tells the story from his or her point of view. These books often explain life as a sidekick, but also show how even potentially-superpowered teens experience ordinary teenage difficulties. “Very often, sidekicks are also on the cusp of moving from the ‘passenger seat’ to the ‘driver’s seat,’” Zimmerly explains, “just like the teenagers reading the books who face leaving home for the first time are on the cusp of independence.

Learn more about the University of Indianapolis Department of English.

“Because many sidekicks are young adults, it makes perfect sense for young adult fiction to tell these kinds of stories.”

So what is the appeal of the sidekick? What leads authors and their readers to want to explore how sidekicks fit in their narratives? Zimmerly has a theory. “It is almost easier to perceive ourselves as the sidekicks,” he says. “Maybe we’re not the strongest, or the fastest, or the smartest – and usually the sidekick isn’t either.”

Giving the readers the ability to place themselves in the story is how the sidekick was first utilized in comic books. Again, because most sidekicks were far younger than the main characters, it gave younger readers someone their own age to relate to.

Zimmerly sees young adult literature as the ideal testing ground to explore new ways to write and challenge norms. “Young adult fiction has historically given its authors a lot of freedom in what they write and how they write it,” he said. “These authors can play with any number of conventions more easily and with more freedom than an author writing for more conventional, adult audiences.”

As young adult literature continues to grow in popularity, more and more of these stories will likely be told, which will continue a growing emphasis on characteristically complex sidekick characters. For more information on Zimmerly’s book “The Sidekick Comes of Age: How Young Adult Literature is Shifting the Sidekick Paradigm,” click here.