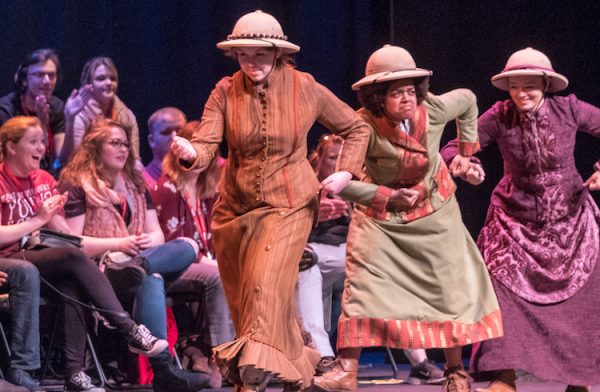 The University of Indianapolis Theatre program will present two series this season. The Main Stage Theatre Series will include a Broadway classic, a historical comedy and a British turn-of-the-century drama. The Student Experience Series will include fully realized productions, staged readings and a movement and written word performance by our graduating seniors. Buy tickets at events.uindy.edu.

“Too Much Light Makes the Baby Go Blind”

by Greg Allen
September 12-14, 8 p.m., Studio Theatre
“Too Much Light Makes the Baby Go Blind” was the longest-running show in Chicago and the only open-run Off-Off-Broadway show in New York. The show is the work of the Neo-Futurism movement, a variant of the Italian Futurism movement and reflects their aesthetic of non-illusory theater, where, as they describe it, “all of our plays are ‘set’ on the stage in front of the audience. All of our ‘characters’ are ourselves… We do not aim to ‘suspend the audience’s disbelief’ but to create a world where the stage is a continuation of daily life.”

In a Berlin nightclub, as the 1920’s draw to a close, a garish Master of Ceremonies welcomes the audience and assures them they will forget all their troubles at the Cabaret. With the Emcee’s bawdy songs as wry commentary, “Cabaret” explores the dark, heady, and tumultuous life of Berlin’s natives and expatriates as Germany slowly yields to the emerging Third Reich.

Bessie, Alice, and Margaret have two things in common: they are married to George Joseph Smith, and they are dead. Surfacing from the bathtubs they were drowned in, the three breathless brides gather evidence against their womanizing, murderous husband by reliving the shocking events leading up to their deaths. Reflecting on the misconceptions of love, married life, and the not-so-happily ever after, “The Drowning Girls” is both a breathtaking fantasia and a social critique, full of rich images, a myriad of characters, and lyrical language

$10 for alumni, senior citizens, groups of eight or more and non-UIndy students with ID

Free admission with ticket for UIndy Students, Faculty and Staff with ID