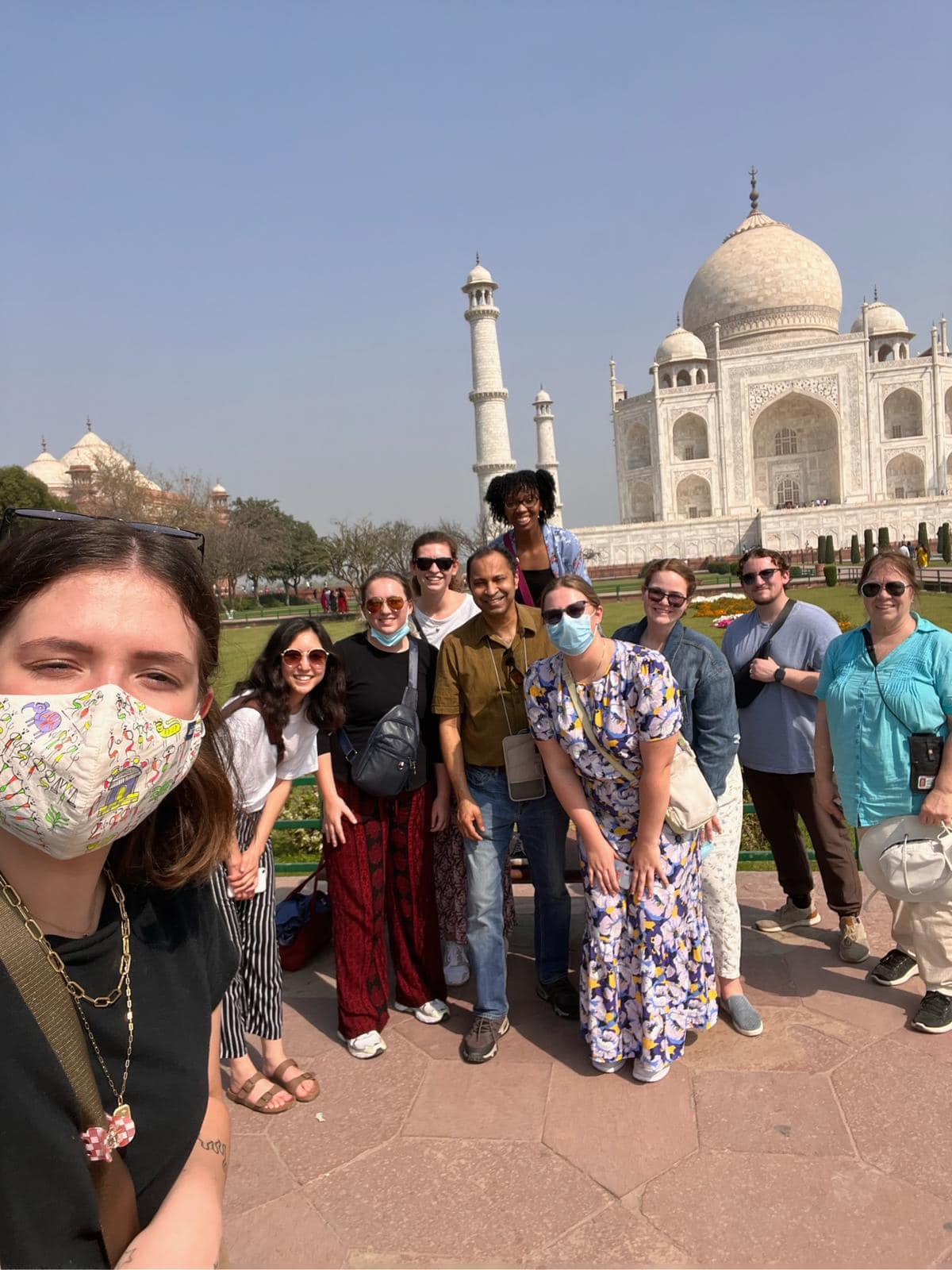 Students and faculty from UIndy ventured to India over Spring Break and spent ten days experiencing the diverse cultures within Delhi, the capital of India, and Kochi (also known in English as Cochin), a city in Kerala, a southern state of India.

The UIndy-led trip was originally planned for 2020, but due to the COVID-19 pandemic, was canceled. Thankfully, the trip was able to move forward this year and UIndy invited students who had planned to participate in the 2020 trip back for this adventure.

Dr. Milind Thakar, Professor of International Relations, organized the trip as a companion to his course, “Politics in South Asia.” Most of the students traveling have taken or are currently taking this course as part of their international relations studies.

“I started this class as an experiential component to another class that I’m teaching called, ‘Politics in South Asia,’ which is about the politics of India, Pakistan, Bangladesh, and other neighboring countries. I thought that if we could travel there, students would have a better idea of concepts and terms that we talked about in class, which are theoretical or un-experienced,” said Dr. Thakar.

From the moment they stepped off the plane, students were immersed in India’s culture and they quickly realized that everything was different.

“I was asked by a professor to sum up the trip and I said it was everything that I expected yet not at all,” said Alexandra Feldhusen ‘22 (International Relations, Political Science). “Dr. Thakar prepared us so I knew going in generally what the smells and sights and sounds would be like, but then when I got there, and I experienced it, it was so much more to take in.”

“As soon as you get there, especially as an American who’s lived in the United States my entire life, it’s very much like an overload of the senses on all fronts, which is really great,” said Daniel Farrell ‘24 (International Relations).

Ten days is plenty of time to make memories. While the group visited local landmarks, such as the Taj Mahal, and observed everyday life in India by visiting street markets and meeting with local families, they also had the opportunity to meet the leadership of the India sourcing office for John Lewis (a prominent department store in Britain) and experience a variety of religious spaces. Looking back, the students cited these unique experiences as the most memorable.

“I’d have to say my favorite moment was when we were walking down in the state of Kerala, in Kochi,” reflected Alexandria. “We got to go to not only the oldest synagogue in India, but of the entire British commonwealth. We went to a lot of religious places and most of them were very peaceful and quiet compared to all the sounds around you.”

“On one of the first days we were there, we went to a Hindu temple and a Sikh temple and visited some other places,” said Daniel. “I really liked those experiences because the Hindu temple itself was very calm and quiet, whereas the Sikh temple was active. A ton of people were there worshiping. There was a lot going on. So the difference between those two experiences was really cool. And we went to a Catholic church; we went to a synagogue; and then of course we went to a mosque. So this vast amount of different, diverse spiritual life is present in the country. That was something I thought was really great.”

There are many ways to immerse yourself in a new culture. One very popular way is through food. Culture influences not only the dishes and their flavors, but also the way a dish is served.

“One moment that I think brought home to the students the notion of how cultures can differ was when I took them out for a meal where they ate off a banana leaf with their hands, with their fingers,” recounted Dr. Thakar. “I think it was an educational moment and it did not make students feel horrified or something, which might have been what people expect. They took to it and recognized that certain kinds of foods can be finger foods and should be eaten with the hands. There’s nothing wrong with it. (And of course they had a choice if they wanted to eat with a spoon.) That was one moment which I thought was a great teaching moment from my point of view.”

Even familiar restaurants like McDonald’s, which the group did visit, become unfamiliar in new countries.

“I did take the students to the McDonald’s in India because it is different,” said Dr. Thakar. “You’ve got a paneer burger, paneer being a cheese. It’s a cottage cheese. That’s for vegetarians who want to sample something other than a potato patty, which is also really popular.”

From the cuisine to the landmarks to the people, India made quite the impact on these Greyhounds. Traveling abroad comes with many challenges, including financial ability, language and culture barriers, and other uncertainties, but take it from students who know, it’s worth it.

“I would do it [travel]. All across the board,” said Daniel. “I would always recommend learning about the place you’re going to and also learning how to be respectful about different customs and being a respectful individual in places that are not your own.”

“Yes, do it while you can,” advised Dr. Thakar. “Once you gather the little stuff, later in life, such as a family and other stuff, you then have to put off these trips until the kids are grown or until you and your partner can figure out whether you really want to do something like this, or you can go on your own. This is the perfect time. College is the perfect time to travel.”

“I know a lot of people are afraid of the price for studying abroad like these trips,” said Alexandra. “Look into grants and scholarships. There are grants through school like the Greyhound Adventure Grant. That’s the grant I applied to and I got it and so a lot of the worry about financial issues was taken off. A lot of people don’t know about it so those who apply are able to get a good amount of money. I was able to get a significant chunk taken care of for this trip because of it. I felt really comfortable about that. So financially there is always a way.”

As the world recovers from the pandemic, UIndy is back in travel-planning mode, with faculty leaders submitting plans for new trips for next year. Dr. Thakar has a specific destination in mind for his next trip, so mark your calendars, Greyhounds.

“I intend, next year, a spring term trip to Japan.”

More information about UIndy-led study abroad programs and financial aid is available through the Center for Global Engagement.