For more than 15 years, Amanda Miller, associate professor and chair of the Department of Sociology, has been studying what happens after people decide to move in together.

From 2003 to 2006, Miller’s research team conducted in-depth interviews with 61 couples (122 individuals), including 30 couples who were working in the service sector and 31 college-educated, middle-class couples. The findings are published in “Cohabitation Nation: Gender, Class and the Remaking of Relationships,” a book co-authored by Miller, and have also been featured in outlets such as The New York Times, Psychology Today, and Journal of Family Issues. 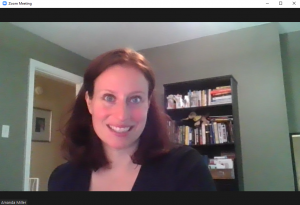 This year, Miller and her research partner, Sharon Sassler from Cornell University, set out to conduct follow-up interviews with as many of the original participants as they could find. They wanted to learn about the most significant events in their lives since they had last connected. Some couples were still together; others were not. Each person had stories to tell.

Although COVID-19 complicated their plans for this research project, Miller and Sassler have so far re-interviewed 66 of the 120 surviving members from the original sample.

How far did you get into the interviews before COVID-19 hit?

“My colleague, Sharon Sassler, of Cornell University and I were in Columbus, Ohio in late February/early March conducting numerous interviews per day and anxiously watching the news at night. The demographers at Ohio State, which included sociologists, economists, and public health professors, among others, were kind enough to let us conduct our interviews from their offices. We had been hearing from them between appointments that COVID-19 was likely to be a serious problem. We both headed back home on the 10th day of interviews (March 8, 2020), discussing before we parted that it may be “a couple of weeks or a month or two when this passes” before we’d get to come back and finish our work. Little did I know that trip would include my last times eating in a restaurant, browsing leisurely in a store, or grabbing a coffee at the cafe for now. In that short period of time, we had completed around 45 interviews.”

How did the pandemic affect your research project?

“Thankfully, we had asked for permission from the Institutional Review Board to also do interviews via Zoom, anticipating that folks may be scattered across the globe. We ended up finishing the remaining interviews from our houses over the next few months, often in different time zones. I finished one interview on a Saturday morning just after midnight. I went from walking participants down a long university hallway with a sterile desk and chair to welcoming them (virtually) to my spare bedroom or screened-in porch. A few times, when my quarantine puppy couldn’t stop fussing in the background, I conducted the interview from the passenger’s seat of my car in the garage. It was definitely an adjustment!”

Was it easier or harder to follow up with people than you expected?

“It was both easier and harder than I expected. Far more people are on social media than ever before, which makes finding everyone so much easier than it would have been 15 years ago. But, people are also more geographically mobile than ever, and this is a stage of life where some women, especially, change their last names. That made things a bit more complicated. We spent days upon days combing through public access information to find as many original participants as possible. Thankfully, the people we relocated were so fantastic and most were happy to chat with us again! A few even spontaneously reached out to a long-ago ex-boyfriend or -girlfriend to encourage them to connect with us.”

What initially stands out to you about the recent interviews you conducted?

“One thing I was struck by methodologically was that so many of the individuals we interviewed did not initially remember being a part of the first round of the study. We have been working with the transcripts of our original conversations for most of our careers, so we know them incredibly well. But, we also needed to remember that for most of the young adults we interviewed, this was just a snapshot in time for them.  Many were quite interested in what their “past selves” had said and wanted to dig into the research after our second interview.

Data-wise, the preliminary results have reinforced for me how very much social class can positively or negatively impact a person’s life. What we really learned about were early mid-life crises. Participants trusted us enough to tell us about heartbreaks, job losses, having academic ambitions thwarted, mental health and substance use challenges, infertility, the stress of modern childrearing, and the death of beloved partners and parents. For some, the power of a completed college education or being in the right place with the right skills at the right time helped them successfully navigate the frequently choppy waters of this life stage, while for others, one life crisis precipitated another with few social supports available to put on the brakes.

I am incredibly grateful that participants are so willing to give up hours of their time and to share their life stories with us. And, I am disheartened to hear how much some of these individuals have struggled and how little it might have taken from their communities to get them back on track. We as a society can do better.”

Learn more about the University of Indianapolis Department of Sociology.