One Step at a Time: UIndy professor to run 160 miles across Indiana 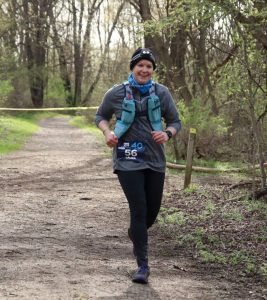 Ultrarunning is a microcosm of life, according to Laura Santurri. “You have these absolutely atrocious moments and these incredibly wonderful moments,” she said. “They’re all kind of fleeting, and you learn to just enjoy them for what they are.”

Next week Santurri, assistant professor and chair of the Department of Interprofessional Health & Aging Studies and director of the Doctor of Health Science program, will undertake the longest challenge of her running career as she attempts to run 160 miles over four days across the state of Indiana to raise money for a new scholarship for the Department of Interprofessional Health and Aging Studies.

The scholarship is meant for students in the Doctor of Health Science, Master of Science in Healthcare Management, or the Master of Science in Gerontology programs at UIndy. The students in these programs have already begun their careers and often have many responsibilities outside of their academics, according to Santurri. “These are our future healthcare leaders,” she said. “And right now, we really don’t have many scholarship opportunities for them.”

When the pandemic began, leadership in the Interprofessional Health and Aging Studies department reached out individually to students and learned about the challenges they had been experiencing, and discovered just how many of them had ended up on the front lines of the COVID-19 pandemic.

“People don’t necessarily think of healthcare workers like physical therapists or occupational therapists as being on the front lines, but they have been,” Santurri said. “I just remember thinking ‘Gosh, despite all this, they’re still committed to their coursework and dedicated to finishing that terminal degree.’”

With all that was going on in the healthcare world, Santurri knew she wanted to give back to her students. “If we can help even one person pay for one three-credit hour course, anything to help alleviate some of the burden, I thought it was a good thing to do,” she said.

Santurri, an experienced runner, always tries to do some sort of fundraising with her running events to make them a more meaningful experience. In the past she has raised money for organizations like the Leukemia & Lymphoma Society, Victory Lap Greyhound Transport; a non-profit that transports retired racing greyhounds from Florida, and the Interstitial Cystitis Association.

After talking with her students after the onset of the pandemic, Santurri felt it was time to raise money for something that directly impacted UIndy. “I’ve been a student, faculty and staff at a variety of institutions of higher education, but UIndy is the first place that I really feel at home,” she said.

How does one find themselves in the position to run 160 miles over four days? For Santurri, the beginnings of her running career were more inauspicious than you might think.

“Years ago I found myself obese and smoking half a pack of cigarettes a day, and I had just started a master’s program in public health,” she said. “There was a fair amount of cognitive dissonance there.”

Santurri also lives with a chronic pain condition from which she found some relief after receiving a spinal implant. “I used to say if I ever started to feel better I was going to take my life back, and that’s what I did,” she said.

Santurri used to run with her father when she was younger so that’s the route she chose to take her life back little by little. Though she had some running experience, she did not consider herself an athlete. She never ran cross country or participated on the track team. In fact, when she began, she could barely walk around the block.

One step at a time she slowly increased her endurance and running ability. “I got to the place where I could run a mile, then I wanted to do 5Ks, then I did some 10Ks with my dad. Then I did a 10 miler, which at the time just seemed crazy,” she said. “But I had lost some weight and I felt good. I eventually got to the point of doing a half marathon and then a marathon.” 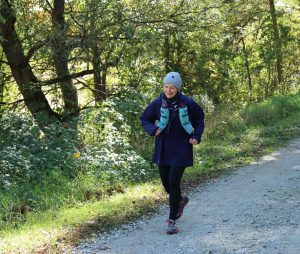 Very few people end up running the marathon distance of 26.2 miles and even fewer venture beyond that into what is considered “ultramarathon” territory. Santurri’s first ultra was the Chicago Lakefront 50K (31 miles) in 2017. “I thought if I can do 26, then of course I can do 31,” she said. “Those last five miles were just brutal.”

But she hadn’t trained appropriately for the race. Sensing an opportunity for improvement, and not wanting the sour taste of the last five miles of the Chicago race to linger, Santurri got a coach and prepared for a 40-mile race, which is where ultrarunning sunk its claws into Santurri for good.

One day Santurri ventured to Chain O’ Lakes State Park to do a training run with an ultra-running group she connected with on Facebook. She was running by herself and came to a place where she couldn’t tell where the trail picked up. Suddenly a woman came bounding out of the woods and told her someone had passed along that Santurri was running alone and she offered to run the rest of the 20 miles with her.

“Now we run together all the time, that’s a perfect example of who the ultra community is,” Santurri said. “Even if you’re vastly different in your ability, there’s a sense of camaraderie and you’re not out there alone—ever.”

She did her first 100-mile race last October, the Indiana Trail 100 at Chain O’ Lakes State Park in Albion, Indiana. She crossed the finish line in just over 29 hours and 14 minutes, which she called a life-changing experience.

She isn’t breaking any records or competing for awards, but that’s not why she loves ultrarunning. “I’ve never been fast, but it’s not about speed,” she said. “It’s about endurance and perseverance and digging deep.”

Santurri frequently finds herself reflecting on that 100 mile race from last October. “It’s the middle of the night, 2 o’clock in the morning, you’re at mile 70 or 80 or whatever… it’s the most challenging and painful thing you’ve ever done,” she said, reflecting on a tweaked knee 30 miles into the run and a “complete breakdown” at mile 52, “but simultaneously it’s just the most beautiful thing you’ve ever done.”

Along with those trials and tribulations also come moments of extreme Zen. Santurri recalls her pacer stopping her at one point at night as they were running along a lake and instructing her to turn off her headlamp for a moment and just take it all in.

Santurri had hoped to repeat her Indiana Trail 100 experience this October but the event was cancelled due to COVID-19. After some discussion with her coach, that’s how the idea to run across the state of Indiana came about.

Santurri will begin her odyssey in Terre Haute and run approximately 40 miles per day heading east with UIndy at the halfway point. On day three she will begin in Richmond and work her way back so that she finishes the run on UIndy’s campus.

Even though Santurri’s past ultra experiences have come on the trails, she is comfortable running on the road as that’s where she’s done most of her training for this run. “The road is tougher on your joints,” she said. “So that’s the benefit of ‘only’ doing 40 miles a day, I get a little time to let my body recover before I get back out.”

Santurri’s husband, who has become her de facto crew chief for her ultra races, has taken the week off to help her, and she has a friend coming in from Ohio who crewed her during the 100 miler last year. She’s also recruited several friends and colleagues to help pace her along the way. She estimates that the total time spent running will be 8-10 hours a day so she’ll need all the distraction she can get.

But there will be many times across the run that there won’t be much of anything being said. Santurri appreciates the quiet reflection that a nice long run brings her. Her runs are the only time that she unplugs fully, not checking texts or emails. “It’s a form of meditation for me,” she said. “Sometimes I use it to work out something I’ve been struggling with, or solve an issue or brainstorm. But sometimes I just let stuff slow into and out of my brain freely.”

Santurri will need all that focus and more as she endeavors on her journey across Indiana. It will be a beautifully painful experience that will require her to dig as deep as she ever has before. She embraces the beauty of the solitude of running, just as she does the mental and physical challenges. She knows there will be hard times along her 160 mile route. But as many runners have found, she also knows: Though pain is inevitable; suffering is optional.