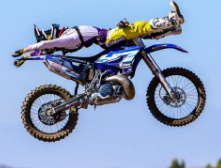 After crisscrossing the globe in 2016, on its biggest tour yet, the greatest action sports show on the planet – Travis Pastrana’s Nitro Circus Live – is returning to North America for more high-adrenaline action, coming to Indianapolis for the first time ever in 2017.  The University of Indianapolis will host the event on July 28 at Key Stadium.

Nitro Circus Live’s 2017 North American tour will feature over 30 world-class athletes. It’s an all-star international lineup, loaded with the best riders in freestyle motocross (FMX), BMX, scooter and inline, performing the biggest tricks in action sports – plus many unbelievable world firsts never attempted before. Audiences will also witness the outrageous contraptions that are totally unique to Nitro Circus. Everything from trikes and tall bikes to a kayak and a whiskey barrel will fly off the famous 40-foot Giganta Ramp (safe landings, however, are not guaranteed).