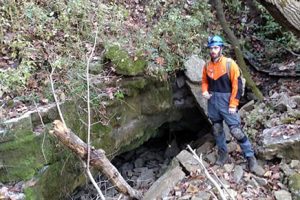 Marc Milne, assistant professor of biology at the University of Indianapolis, outside the Stygeon River Cave in southern Indiana.

Marc Milne, assistant professor of biology, has a knack for discovering new spider species. His latest publication, “A new species of spider (Araneae, Linyphiidae, Islandiana) from a southern Indiana cave” appeared in Subterranean Biology 26: 19-26. His work was covered by Fox News, MSN Australia and New Zealand, the CBC in Canada and highlighted in the Pensoft blog.

While it’s hard to put a number on the species Milne has discovered (some of these creatures belong to groups that haven’t been examined in 80 years), he said the most common group in which he finds new species is “Linyphiidae – sheet-web weaving spiders – the ones that build the webs that you can see early in the morning in your yard when the dew covers their webs,” Milne explained.

Milne’s work takes him from the sand dunes of Indiana Dunes National Lakeshore to the dark caves of southern Indiana, and many nature preserves in between. New species he’s focusing on now are Ceraticelus sp. from the Indiana Dunes National Lakeshore – found in the sand in the leaves near the dunes of Porter County, Lophomma sp. from leaf litter at Glacier’s End Nature Preserve  in Johnson County and Agyneta sp. from leaf litter in Yellowwood State Forest in Brown County.

Although Milne’s spiders are just a few centimeters long, he said there’s much to learn from these tiny creatures, which tend to be understudied because they’re harder to identify.

“These small organisms often play critical roles in our environment such as decomposition and the consumption of dangerous vectors of disease – like how spiders consume tons of mosquitoes each year,” he said. 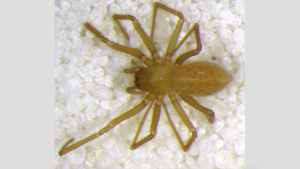 Milne’s latest cave-dwelling discovery, Islandiana lewisi, occurred in a matter of hours exploring the Stygeon River Cave, thanks to his colleague, Dr. Julian Lewis, an independent isopod taxonomist who was familiar with the cave. The new species, named for Dr. Lewis, may be the only species of spider living inside the cave.

“Cave-dwelling spiders are poorly known because not many scientists are also cavers,” Milne said. “Also, many caves are rarely visited and therefore underexamined. Conducting research on cave organisms can oftentimes yield interesting findings.”

Milne’s work involves frequent collaboration with undergraduate students. One group is currently working on research to add more records of known spider species living in Indiana. (Officially, Indiana has 454 spider species. After the publication of the upcoming research, there will be over 550.)

“I enjoy working with engaged students, because they make the work fun for me. It’s also great that they learn new techniques, get the opportunity to present their research, and have a leg-up on competition when it comes to applying for grad school or professional school,” Milne said.

Lucas Frandsen ‘19 (human biology, physical therapy concentration) is one of the students collaborating on the spider records project.

“The hope is we can take this data and use it to conserve habitats,” Frandsen said, noting that the research is important to anyone working within environmentalism and conservation. He also said he’s gaining useful professional skills in the process.

“I’ve written manuscripts before, but the standard we’re pushing this manuscript to is much higher so we can get it published. Dr. Milne asked me to do a lot of the writing and he’s been providing feedback. It’s definitely been a new and exciting experience.”