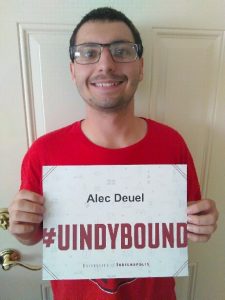 Incoming University of Indianapolis freshman Alec Deuel knows about overcoming obstacles. He was diagnosed with autism in grade school and struggled academically.

In eighth grade, he enrolled at Damar Charter Academy and the story changed: By day three, he tested out of algebra, earning his first high school credit. Recently, he scored 30 on the ACT, well over the 22.6 average for 2017 test takers in Indiana, according to Prep Scholar.

“Damar has been a tremendous help for him and allowed him to work at his pace and at his level,” Jennifer Atkinson, Alec’s mom, said.

Another obstacle he and his mom have overcome is homelessness. Atkinson credits the Salvation Army for providing transitional housing, and Damar for working with staff at the Salvation Army to provide modifications for a guest with autism.

Alec is now on the path to becoming valedictorian of his high school graduating class and was awarded the Senator Richard G Lugar Award of Academic Distinction through the University of Indianapolis. Alec’s goal is to become a professor of paleontology, something he’s been talking about since he was six years old.

This Christmas, he’s not asking for dinosaurs, though. He wants a Jack Doyle jersey. Alec met the Colts tight end when he visited Damar shortly after joining the team. Alec has been a fan ever since.

On Sunday, Dec. 16, he’ll be on the field to watch the team warm up before he takes his MVP seats for the game with his mom, grandmother and step-grandfather. He’s been named the Damar MVP for the game as part of the Colts’ partnership with Damar Services to reward students for their achievements.

We look forward to welcoming Alec and the entire Class of 2023 to campus next fall!