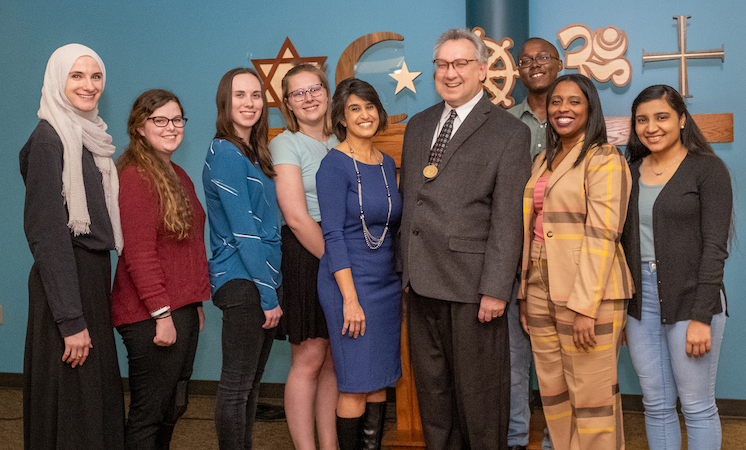 Dr. Michael Cartwright, Vice President for University Mission, was recognized with the Jerry Israel Service Award at the Interfaith Peace Service in March.

The Jerry Israel Service Award is named after our seventh university president who served faithfully from 1998-2005.  Dr. Israel was known for encouraging students, faculty and staff to engage one another in searching conversations (with honesty, respect, and humility) in the midst of living out their religious convictions.

Dr. Michael Cartwright led the way for the creation of the Office of Ecumenical and Interfaith Programs (EIP) in 2002. Dr. Cartwright wrote a grant funded by the Religion Division of the Lilly Endowment called The Crossings Project. Through this grant, EIP had the resources needed to establish rich programming allowing the campus community to gain a deeper understanding of the Christian faith as well as many other faith traditions. Programs such as the United Methodist Youth Leader Scholars and the Interfaith Scholars programs were created under Dr. Cartwright’s leadership.

“Jerry Israel commissioned me to serve to create the Office of Ecumenical & Interfaith Programs, so I am especially pleased to be presented with this award which commemorates President Israel’s life and work. I count it a privilege to have had the opportunity to do this work at UIndy from 2002 to 2015 when I served as Dean of EIP,” Dr. Cartwright said.

McCleary Chapel was built as an interfaith space where all could gather and worship. Dr. Cartwright carefully thought out the space so that it is welcoming to all. Christian worship, the Interfaith Peace Service and Interfaith marriage ceremonies are among the many events that take place in the chapel.

The Crossings Mural, which covers the wall just outside the meditation space, “Reaching Out, Gathering in, Loving One another” is a constant reminder to campus to give and receive hospitality with one another.  Dr. Cartwright commissioned Erika Woods to create the beautiful artwork, which is found next door to McCleary Chapel.  The Crossing Mural is an evocative reminder of the aspiration of this United Methodist Church-related university to provide enriched opportunities for students to engage in Christian formation and interfaith exploration as part of the educational experience.

Dr. Cartwright also created a program that honored African American Spirituality through honoring African American Sages. This event was inaugurated in February 2005 when University of Indianapolis representatives heard a set of presentations on the theme of “The Sacred World of Black Folks” by two distinguished spiritual sages, The Rev. Dr. Eugene Blair and The Rev. Glandion Carney. Dr. Cartwright had a display designed to hang in the Schwitzer Student Center on the second floor to pay tribute to these individuals honored during the African American Sages programming.  It remains on display there today.

Dr. Cartwright worked with Jewish faculty and students to create a Sukkot Hut, a place in which Jews are supposed to dwell during a week-long celebration beginning five days after Yom Kippur. These huts represent those used by Israelites during their 40 years of wandering in the desert after escaping from slavery in Egypt.  Each fall for several years the hut was built on Smith Mall to celebrate the Jewish holiday of Sukkot.

In 2012, Dr. Cartwright established the Kephart Award for Academic Achievement in Interfaith Exploration. The award was named after Bishop Ezekiel Kephart, a United Brethren pastor and one of the founders of the University of Indianapolis.  Kephart demonstrated a welcoming of others different from his faith tradition.

“We could truly go on and on about Dr. Cartwright’s accomplishments and contributions to our campus community, especially as it relates to how we think and work to achieve interfaith cooperation. These are just a few highlights from his very productive time in leading this important work on our campus. Our ecumenical and interfaith approach to religious life and programming must be credited to the vision and leadership of this great UIndy servant among us. Please join us in celebrating and appreciating the work of the Rev. Dr. Michael Cartwright,” said Rev. Arionne Williams, associate chaplain in the Office of Ecumenical and Interfaith Programs.