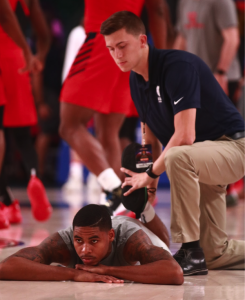 Though Anthony Richardson has spent his entire undergraduate career at UIndy, it wasn’t until he changed his major to athletic training that UIndy became “home” to him. He will graduate in May 2019 with a bachelor’s degree in athletic training and head toward his new home – Campbell University in North Carolina, where he has accepted a graduate assistant athletic training position and will pursue a masters degree in education with a focus in kinesiology.

“Some of the most important people in my life I have met here. I am proud to be a Hound and will truly miss this school.”

During his undergraduate education, Richardson participated in the Athletic Training Student Association (ATSA) and in intramural sports. Playing intramurals allowed him to make friends and connections with people he would not have encountered within his major.

“I was able to expand my network by meeting people who have a desire to work in different positions in athletics,” said the Greenwood, Indiana native.

“Dr. (Jessica) Jochum has been very instrumental in my education,” Richardson said. “She has taught me so much in the classroom and has put me at great clinical sites that helped me apply the classroom knowledge and gain confidence, both of which are crucial in this field.”

Learn more about programs in the College of Health Sciences

ICYMI: UIndy Department of Theatre is presenting a production of The Taming of the Shrew this weekend! For Dates, Times, and More Information, Visit bit.ly/2WuFTkK

Did you receive a scholarship to attend UIndy? Are you using your experience from UIndy to make a difference? Help us tell your story and celebrate #GivingTuesday! Learn more: bit.ly/3mcYbRN pic.twitter.com/duq3WUu1Lw