Torrey Wilson always figured he would work in healthcare, but the plan was to be a doctor. There was only one small problem with that. “You don’t always really know what you want at 17, but I followed that path and I was miserable,” Wilson said. “And it wasn’t the work. I actually loved chemistry and biology.”

He credits the chair of the psych department at Xavier University in New Orleans for igniting a new passion for psychology. “The chair knew how miserable I was, and tried to convince me to take a psych course,” Wilson said. He was initially resistant because it wasn’t something he had ever given any thought to because, Wilson said, “there just wasn’t a tradition of psychology in the African American community.”

But the professor persisted and offered to waive an intro course requirement for Wilson. “The notion of doing work that was psych-related was foreign to me,” Wilson said, “but I took ‘Psychology of Women’ and it literally changed the direction of my life.”

That’s good news for the University of Indianapolis as Wilson joins the faculty as the Dean of the College of Applied Behavioral Sciences (CABS). Prior to arriving at UIndy, Wilson most recently served as associate professor of clinical psychology at the Illinois School of Professional Psychology at Argosy University. In his faculty role, he served as chair of the curriculum committee, taught graduate courses, advised doctoral students and served on program and university-wide committees. Wilson has also served as the Department Chair of the Clinical Psychology Program at Adler University in Chicago. While there, he successfully led the unit through the American Psychological Association (APA) accreditation, facilitated recruitment and oversaw the department budget, while instituting its social justice curriculum. 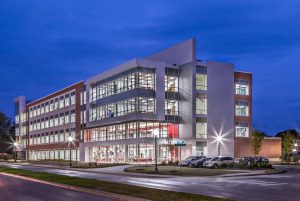 After Wilson received his master’s degree from Xavier he moved to New York for several years and worked with at-risk adolescents at a public high school. It was there when he began to understand how systematic deficiencies can influence outcomes, and that caregivers and patients must work within the constraints of systems in order to achieve positive outcomes.

“I worked with students who the school system almost thought of as throwaways,” Wilson said. “But we’d have these students, who, through their own moxie, had a clear vision of what they wanted to do. All they needed was support. You can teach, you can work with students, you can do all these things, but you have to recognize that there are systemic issues that ultimately affect the ability to be effective.”

“I came to a deeper understanding of systems, and how you can do great work with an individual, but you have to work within the system to actually create that final outcome,” Wilson said. “This is actually how I ended up in administration.”

Wilson says that many people have a misunderstanding of what psychology actually is. People think of psychology in two ways: “therapy, and then psych labs where you’re running rats through a maze and stuff like that.”

“But everything is behaviorally anchored. We talk about healthcare, and one of the things that I’m focused on is making integrated healthcare a fundamental way in which CABS training occurs,” Wilson said.

Integrated healthcare is characterized by a high degree of collaboration and communication among health professionals. What makes integrated health care unique is the sharing of information among team members related to patient care and the establishment of a comprehensive treatment plan to address the biological, psychological and social needs of the patient.

Wilson says that the reason we have health epidemics is not because we don’t have the knowledge or technology to cure illness, but rather because of the behavioral component. “Yet, psychologists aren’t as present in the healthcare system,” Wilson says. “We’re mainly relegated to mental health issues.”

“That’s what is so great about the Health Pavilion,” he says. “It is a collection of different health programs, trying to build a system that trains and prepares students to actually understand health holistically.”

Wilson’s first job was at Rush Presbyterian-St. Luke’s Hospital in Chicago where he worked in outpatient psychiatry doing transplant evaluations and substance abuse treatment. There he worked with social workers, nurses and physicians collaboratively to determine the best course of action for people who needed transplants and how to get them healthy again. “Everything in my post-doctoral life has been around this notion of an integrated approach to helping people be healthy,” Wilson said.

Wilson believes the healthcare system itself is moving in a more integrated direction, but the health professions and behavioral health education continue to lag behind. Wilson attributes this to the different healthcare professions remaining siloed to either protect their “turf” or their own identities, or perhaps just because it’s easier to maintain the status quo than it is to adapt.

“If you’re still doing healthcare and thinking psychologists are doing what they did 30 years ago, you’re going to be obsolete pretty quickly,” Wilson said. “I think what UIndy has here is unique, you have these different health programs under one roof—the difficulty is moving them towards an understanding and knowing what it means to work together.”

There is a clear need for those working in the applied behavioral sciences today and Wilson believes the University of Indianapolis will continue to help meet that need, and he’s happy to be here leading the CABS.

“I have always considered myself a New Orleanean, never a Chicagoan, but it really hit me when I accepted this job that Chicago had become home,” Wilson said. “But I’m looking forward to discovering a new home and new community here at UIndy.”

Read more about the College of Applied Behavioral Sciences here.