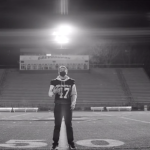 Gov. Eric Holcomb announced Wednesday that the Indiana State Department of Health would feature UIndy student-athlete Will Loggan ’22 (sport management) in a public service announcement that will air during the Super Bowl.

In the 30-second video, Will Loggan talks about the difficult loss of his father, Paul Loggan ’85, to COVID-19 last April. Paul Loggan was a beloved athletic director for North Central High School and a member of UIndy’s athletic Hall of Fame.

Gov. Holcomb shared a clip of the public service announcement at his news conference Wednesday, saying it would be aired throughout the state.

“The message that will come across is one that is not just compelling, but it will make a long, lasting difference,” Gov. Holcomb said.

The Loggan family has now come together to honor Paul’s legacy and invite fellow Hoosiers to get the vaccine.

The public service announcement acknowledges the tragic loss of life due to the coronavirus pandemic and encourages Hoosiers to take the vaccine as it becomes available.

Will Loggan said he was eager to talk about his father with a large audience “and tell them how great of a man he was. He was a people’s man. Everybody loved my dad. After sporting events, he was always the last one to leave the gym, make sure everybody got a ride home safely. He wanted to take care of everybody.”

In August, Will spoke about his father’s memory and impact on his life as part of UIndy’s Protect Our Pack initiative. Watch here. 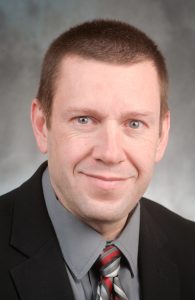 The University of Indianapolis has named Scott Young to serve as the next Vice President for Intercollegiate Athletics. Young will assume the role on September 1, 2020, following the retirement of Sue Willey, who served in the position for 17 of her 45 years of service to the University.

Young’s selection for the cabinet position follows a nationwide search to fill the top leadership role for the Department of Intercollegiate Athletics. During his 26-year career at the University of Indianapolis, Young has served in numerous roles within the Department of Intercollegiate Athletics, most recently as Senior Associate Athletic Director for Compliance. His achievements include regulating all compliance for 23 NCAA sports programs at the University, oversight of the Sports Medicine and Sports Information Departments and multiple athletic programs, and serving as tournament director for NCAA playoff games and tournaments.

“Scott demonstrates an equal commitment to the University of Indianapolis and to the principles of excellence that define our campus culture,” said President Robert L. Manuel. “Scott’s dedication to accountability and clear communication, combined with his innovative ideas for growing our athletics program both in terms of public awareness and in breadth, will be a vital asset in University initiatives including recruitment and retention.”

“During the past two decades, Scott has excelled at each of his positions serving the Department of Intercollegiate Athletics, and I’m sure that will continue in this important leadership role,” said Sue Willey, Vice President for Intercollegiate Athletics. “Scott is a dedicated UIndy person through and through. His love for the institution will be a constant support for athletics and the University.”

“I would like to thank Dr. Manuel and the search committee for this tremendous opportunity to lead UIndy athletics, the place I have called home for the past 26 years. I also would like to thank Sue Willey for her incredible mentorship and support, which have helped foster me into the leader I am today,” Young said. “The standards for UIndy athletics will continue to be for our student-athletes to win as students, win as people, and win as athletes.”

President Manuel also noted Sue Willey’s legacy that catapulted University of Indianapolis athletics to national recognition and countless accolades, including 90 Academic All-America honorees, a mark that is in the top ten in NCAA Division II.

“I would like to express my gratitude to Sue Willey for her many years of service to the University of Indianapolis and for her remarkable accomplishments that have positioned the Department of Intercollegiate Athletics to continue to climb to new heights,” President Manuel said. “Scott is ideally suited to build on the high standards of success that Sue established.”

His previous roles include assistant head baseball coach and coordinator of game-day operations. As a member of the 2000 coaching staff, Young was inducted into the UIndy Athletics Hall of Fame in 2012 with the entirety of the 2000 baseball squad. He has also served as an adjunct instructor in the University’s kinesiology department, and prior to joining the baseball coaching staff, he served as an athletic trainer working with baseball, basketball, football, wrestling, and soccer.

About the Department of Intercollegiate Athletics
The University of Indianapolis Department of Intercollegiate Athletics is nationally recognized as one of the top overall athletic programs in NCAA Division II. With nearly 700 student-athletes, the department boasts a 3.32 GPA for all 23 sports. Notable achievements include top-10 finishes in the Learfield Sports Directors’ Cup seven out of the last eight years, Great Lakes Valley Conference All-Sports Trophy wins for eight consecutive years and women’s golf national championships in both 2015 and 2018. The department’s mission is to provide opportunities for participation in intercollegiate athletics in an environment that encourages the achievement of athletic excellence and good sportsmanship while maintaining the proper balance between participation in athletics and the educational and social life common to all students. Learn more: athletics.uindy.edu.