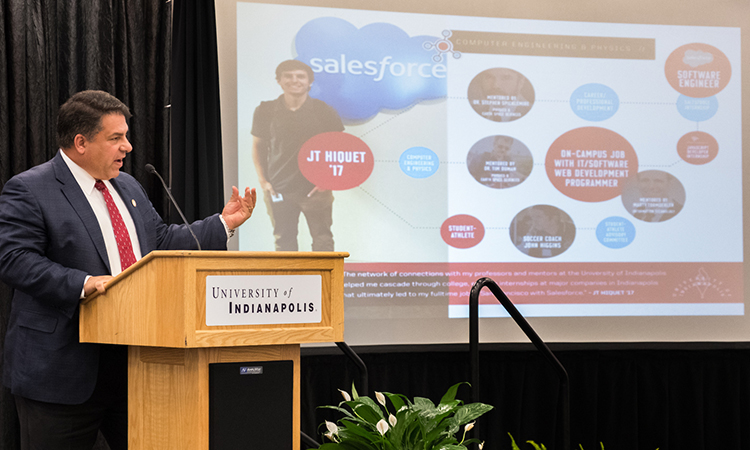 As alumni from near and far returned to the University of Indianapolis recently for Homecoming 2017, the University took time to honor graduates who have distinguished themselves in a variety of ways since leaving UIndy.

The annual Honors and Recognition Dinner, hosted by the Universitys Advancement Office, allows the University to recognize alumni who represent the best of the UIndy experience and success. In addition, the event served to recognize former Indianapolis Mayor Greg Ballard, visiting fellow for the Universitys Institute for Civic Leadership and Mayoral Archives, who was named an Honorary Alumnus.

The University of Indianapolis is proud to call these distinguished award winners members of the Greyhound family. They represent the institutions legacy in all they do as they live our motto: Education for Service. Congratulations to our 2017 Alumni Award winners.

Tamara Wolske 05 graduated in 2005 with a masters degree in gerontology and currently serves as an assistant professor and director of academic programs in the Center for Aging & Community. She serves as the chapter representative for the Delta Mu Chapter of Sigma Phi Omega, the national honor and professional society in gerontology in higher education with an emphasis on education and service. Additionally, she works as the public policy representative for the University with the Association for Gerontology in Higher Education, serving as chair from 2012 to 2014. She also is the past-president and current board member for the Perry Senior Citizens Services in Perry Township.

Daniel graduated in 2005 with a degree in visual communication design and currently has a studio in the International Marketplace Coalition in the Lafayette Square area. As one of the founding members of Nopal Cultural, Daniel has worked to make Indianapolis and surrounding cities more diverse by promoting Latino-American culture. His work has united Latinos and non-Latinos in the fields of visual art, music and literacy.  He has led workshops for the Indiana State Museum, the Girl Scouts Fiesta Camp, Two Thirds Studio, and has helped coordinate the Day of the Dead celebration at the Eiteljorg Museum. Artwork seen throughout the library this evening was designed by Daniel and created in partnership with current University of Indianapolis students.

Larry Miller 62 graduated from UIndy in 1962 with a degree in philosophy then went on to complete a Ph.D. in mathematical logic. After teaching at Tulane University, he moved to California to work on computer systems and network issues at Hewlett-Packard. In 1985, he joined Lockheed Martin Space Systems Company. For more than 20 years, Miller developed software for missiles to be used in the National Missile Defense System. As the senior staff software engineer, flight software manager, and certified principal engineer for flight software, he designed the program that allowed an interceptor missile to hit a strategic missile, the result is like hitting a bullet with a bullet. He also sang in the San Francisco Symphony Chorus, a group that has performed at Carnegie Hall and won five Grammy Awards. He also makes time to read classic literature and attend Shakespeare festivals.

Former Indianapolis Mayor and University of Indianapolis Visiting Fellow Greg Ballard served as the 48th Mayor of Indianapolis from 2008-2015. During his tenure, he was a strong advocate for the University of Indianapolis, delivering his 2014 State of the City address from the Christel DeHaan Fine Arts Center and headlining the 2015 Richard M. Fairbanks Symposium. At the completion of his second term in 2016, he joined the University community as a visiting fellow for the Universitys Institute for Civic Leadership and Mayoral Archives and since has engaged students in a variety of ways including an ambitious project to create a sustainable energy plan for Indiana. He also organized a special screening of The Burden, which brought filmmaker Roger Sorkin to campus, hosted 24 foreign journalists on campus during the election and worked with WICR-FM students on election night. That collaboration earned them first place in the Broadcast Education Associations Festival of Media Arts competition in the radio newscast category.

Named in honor of University President Emeritus Gene E. Sease and his wife, Joanne, this award recognizes couples who contribute their time, talent and treasure to the University.

Tom graduated in 1964 with a degree in biology and worked as a State Farm agent for 41 years. He established the Meals on Wheels program in Greenwood, Ind., and helped found the Center Grove Education Foundation. He served for 15 years on the Facilities Committee for Center Grove Community Schools and remains an active member of the Greenwood Kiwanis Club, where he was a former lieutenant governor for the Indiana District.

Mary Kay graduated in 1965 with a degree in English and taught high school English for 30 years and was named a Top 10 Indiana teacher in 2000. She serves on the board of the Alliance of the Indianapolis Museum of Art and the South Group board of the Indianapolis Symphony Orchestra. Also active in the Greenwood Kiwanis Club, she was named Kiwanian of the Year for the Indiana District in 2016. Both Tom and Mary Kay served as presidents of the University Alumni Board of Directors and on the Board of Trustees. Together, they also serve hot meals to 90 people each week in soup kitchen at their church.

The University of Indianapolis is proud to call these distinguished award winners members of the Greyhound family. They represent the institutions legacy in all they do as they live our motto: Education for Service.