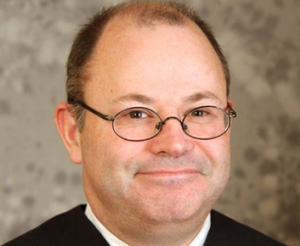 Marion County Superior Court Judge James Osborn will speak at the University of Indianapolis as a featured guest of the Pre-Law Student Association (PLSA) Judicial Lecture Series, 7 p.m., April 9, 2019, in UIndy Hall C in the Schwitzer Student Center. L/P credit is available and registration is encouraged.

Judge Osborn’s professional experiences have lent him extensive knowledge about the jury trial process. He has served on the Marion County Superior Court for over ten years. During this time, he has sat for many years on the Judicial Conference of Indiana Jury Committee and currently serves as the Judicial Supervisor of the Court’s Jury Services Department. Prior to joining the bench, Judge Osborn served as a prosecutor and public defender in Marion County as well as worked in the Indiana Office of Attorney General.

“Jury trials are the cornerstone of the judicial system in the United States and a hallmark of self-government,” Judge Osborn said. “A jury of one’s peers is, literally, the people governing the people.  Consequently, the jury trial process plays a fundamental role in the delivery of justice and maintaining a government of the people, by the people, and for the people.”

The PLSA Judicial Lecture Series benefits students interested in law and government and offers the University community a venue to learn more about Indiana state government. David Root, assistant professor of political science and pre-law advisor, said hearing from judges brings the law to life for students so that they can understand the workings of the real world.

“Additionally, because judges handle so many different kinds of cases on the bench, they refer to a wide range of situations as they explain what they do. In this respect, I’m excited for students to hear some of the factual scenarios Judge Osborn has encountered as he describes his expertise of the jury trial process,” Root said.

Previous speakers in the PLSA Judicial Lecture Series include Indiana Supreme Court Chief Justice Loretta Rush, who provided the inaugural lecture in 2018, and Pulaski County Circuit Court Judge Michael Shurn ’71. Topics included the important role that University of Indianapolis students will play in shaping Indiana’s future in the coming years, in particular those looking to enter the legal field.