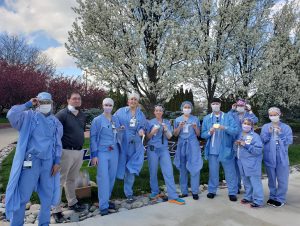 “I asked some friends who are nurses if their emergency room would be in need. They are parents that I met through Indiana FIRST while mentoring a team,” Emery said. He has also been approached by a local fire department.

The design was provided by a 3D printing machine manufacturer that is producing the shields for local hospitals in Europe. Emery researched the need for face shields during the COVID-19 crisis and notes that the design has been vetted. He has registered with national initiatives to assist in the manufacturing of personal protective equipment for first responders.

“During this pandemic, there are so many nurses and doctors who are working tirelessly to help the population,” Emery said. “I found that the 3D printing community was stepping up in huge ways to try and help.”

Emery had enough materials to manufacture about 50 face shields. He delivered them to St. Vincent in April.

“As we are left at home while the first responders, doctors and nurses are out every day trying to help the individuals that have been infected with this virus,” Emery said, “I wanted to do my part to help them.”

Emery is continuing to produce face shields and is planning to donate more as he is able to manufacture them. 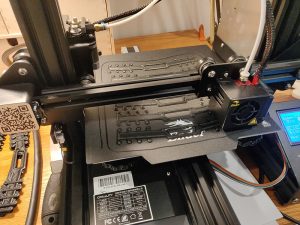 Paul Talaga, assistant professor of engineering, used a 3D printer to manufacture “ear savers” for healthcare workers on the frontline. The device attaches to the elastic straps of the mask to alleviate discomfort. To reduce the danger of contracting the disease, healthcare workers must wear a mask at all times when working with patients. 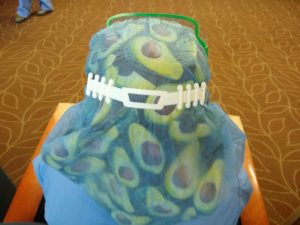 A nurse at an Indianapolis-area hospital wears one of the “ear-savers” produced by Paul Talaga.

The R. B. Annis School of Engineering hosted the annual FIRST Robotics Competition Kickoff Event in early January. Dozens of high school students from around the state received their challenge to design, build, program and test a robot within six weeks. 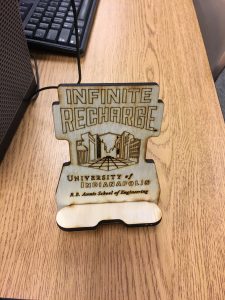 The R.B. Annis School of Engineering also designed and fabricated cell-phone holders for all student participants.

It’s all part of the INFINITE RECHARGE FIRST RISE℠, powered by Star Wars: Force for Change, a worldwide challenge for young inventors to test their mettle and collaborative skills, organized locally by IndianaFIRST. R. B. Annis School of Engineering faculty and students provided presentations, met with students, and offered a VR experience of the newly-released game field.

At Saturday’s Kickoff, teams were shown the INFINITE RECHARGE game field and challenge details for the first time, and received the Kickoff Kit of Parts, which is made up of motors, batteries, control system components, construction materials, and a mix of additional automation components. With limited instructions students, working with experienced mentors, have about six weeks to create their robots to meet the new 2020 season’s engineering challenge. Once the teams build a robot, students will participate in one or more of the Indiana district events that measure the effectiveness of each robot, the power of collaboration, and the determination of students.

New challenging game elements in the game INFINITE RECHARGE make for a complicated strategy with many options. INFINITE RECHARGE has high school robotics team students around the world eager to capture a championship. After the game was revealed Saturday, students immediately began brain-storming and drawing up initial designs for robots that will compete at several events this season. Teams have about 6 weeks to build their robots before the competition season begins.

During the FIRST build season, multiple UIndy faculty, staff, and students assist local FIRST teams with their robots, including the fabrication of parts using the R. B. Annis School of Engineering’s fabrication facilities. The University of Indianapolis is buzzing with activity as summer camps, classes and conferences are in full swing this June. It’s part of the University’s broader goal to engage with the local community year-round by offering valuable campus resources for families, businesses and professional organizations. The regional competition, hosted by the University of Cincinnati, is open to students from throughout the Midwest. Students are given 36 hours to create web or mobile applications or other programs.